The original airport property was constructed during the Second World War as part of an Army airfield. Following the war the property was used for unpowered glide tests.  During the Korean War, the air base was reactivated and in the 1950s served as a host for flight competitions. By the 1960s, the property became joint military and civilian, and was adapted to be accessible by jet airline services. The airport property became a forward operating base during the Cuban Missile Crisis of 1962. The airfield was taken over by the City of Orlando in the mid-1970s and renamed the Orlando International Airport in 1976, and has since served growing numbers of passenger traffic. 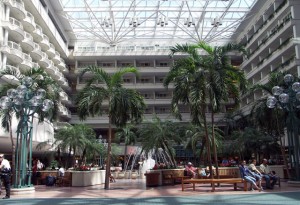 Dozens of shopping and dining options await travelers arriving at Orlando International Airport. Such venues are located in the main terminal as well as in the satellite airside gate areas. Most shopping and dining options are available on Level 3 and include a variety of options at the food court such as Starbucks, McDonald’s, and Nathan’s Famous Hot Dogs. Sit-down restaurants include Macaroni Grill and Chili’s Too, both located south of the food court near the security checkpoint for Gates 1 through 59. Shopping options are found throughout terminal A and terminal B and include Magic of Disney, Borders Books, and GUESS. Additional services found on Level 3 include currency exchange, ATM machines, a post office drop box, Internet kiosks, and a walk-in medical clinic.  Passengers can enjoy complimentary Wi-Fi services in all public areas.

Car hire services at Orlando Airport provide car options from nearly one dozen carriers.  Most of the car hire companies are located on airport property and don’t require shuttle bus services to pick up rental cars. Rental car desks are located in Terminals A and B, and on Level 1 of Ground Transportation.  A few of the major car rental companies represented at Orlando International Airport include:

Over 15 off-airport car rental companies are also available in a variety of vehicle types. Free shuttle bus transportation to these car rental locations is available from the airport. Visit the Orlando International Airport for information regarding the off-airport rental services and access to those providers.

For more information about Orlando international Airport, access their website at http://orlandoairports.net or call their general information number at 407-825-2001.

The airport is located at One Jeff Fuqua Boulevard, Orlando, FL 32827.